When we were in Kemptville the other day we stopped in at a little hole-in-the-wall cafe called Crusty Bread. The food was amazing and they serve mostly crepes. I had ratatouille & goat cheese and the retired-guy had sausage and apple. We were not disappointed so we ended it by sharing a home-made butter tart followed with Earl Grey tea and coffee.
I noticed the place-mat had a Quimper pattern on it and I immediately thought of my blogging friend, Deb from http://confessionsofaplateaddict.blogspot.ca/ who collects this amazing pottery. 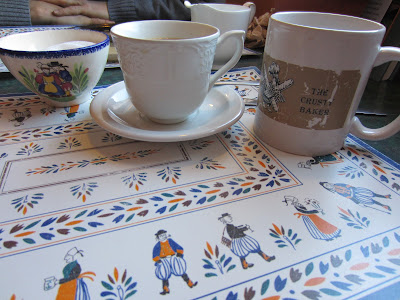 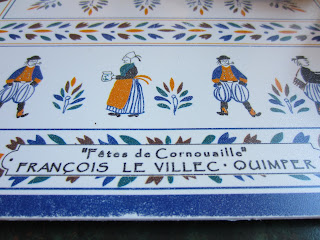 Deb's blog was the very first one I followed back in 2010. I was so in love with her photos, her kitties, her china & pottery. This is where I first saw Quimper pieces. http://confessionsofaplateaddict.blogspot.ca/2009/04/tablescape-thursdayorcompletely-quimper.html I have one lug bowl with the name Pierre on the side.  I found it in a little antique shop and when I brought it home I was asked why in heaven's name would I buy a dish with the name Pierre on it? I could have had fun with this but instead I admitted that I loved the dish and plan to name my next male cat Pierre. =^..^=

It was a grooming session like no other tonight. Combed, brushed and nails clipped. This is done once a week since years back when I discovered one of Lily's nails had curled and grown back into the skin. At the time, I was nail clipping every two weeks. I was able to clip the nail, add a bit of peroxide and it did heal within a day but since then it is a weekly regiment. Sierra loves to be combed and hardly notices the nail clipping and soon drifts off to cat's paradise while Audrey despises it and finds the whole process to be distasteful and down-right deplorable. While I comb, she kicks. While I clip, she chews...hard. I know I will pay for this. 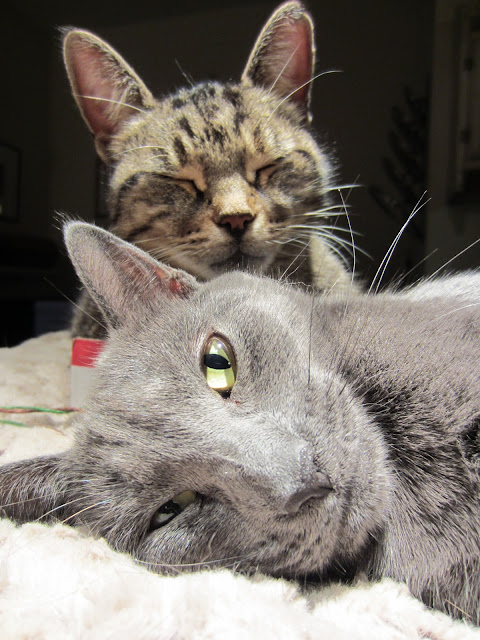 The wheels are turning.

Wishing all my American friends a very "Happy Thanksgiving".
hugs, Deb
Posted by Deb at 6:15 AM